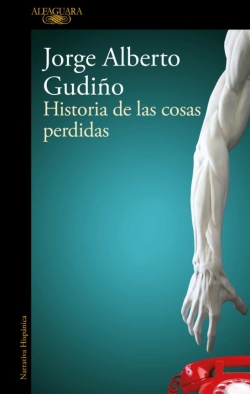 The story of our lives is not only that of the things that we've lost, it is also that of those few things which we decide to keep and that, in the end, cease to make sense to anyone other than those who are no longer around.

Roger's phone starts ringing in the early morning; it can only be bad news or, perhaps, it's Denise, his ex, who is sorry and wants to get back together. That's all he can think as he tries to rescue the device that has fallen under his bed. What he least expects is that they're calling from the hospital to ask for his authorization to amputate Andy's arm, his boss's. He realizes that it's a most unusual call, but slumber and surprise force him to give a hasty answer.

From there on, his life will take a 380 degree turn, for he will be forced to reconstruct a story of which he is merely an incidental character. However, as he slowly delves into it, he will come face to face with his own dramas: he is unable to overcome the separation with Denise, his sister is going through a complicated pregnancy, and he is pressured by his boss and finds himself at the edge of things which he never thought he would do.

History of Lost Things calls into question how well we actually know others, how far are we capable of going to achieve what we want and how, finally, what we discard says about us.

Narrated by the protagonist's self-mumbling, who is incapable of not telling himself stories, even if he claims that he's unable to concoct them, this novel lightly crosses the thick night of Mexican violence, riding on the back of a spied spy, who is chasing a dead man, while he patiently meditates on love, desire, impunity, garbage (again a great theme), or mockery and death, when not the bitcoin market, influenza and the specific environment of an office that very well may be in bankruptcy.

"Solid and intelligent, History of Lost Things resonates on the one hand with the classics of hardboiled novels and, on the other, with those that dwell upon adventure and essay, with present-day turbulent Mexico for a setting. Well done, Jorge Alberto." Carmen Boullosa