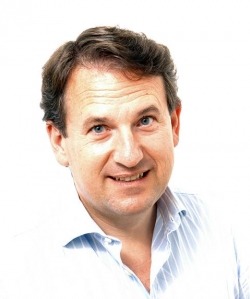 Miguel Ruiz Montañez has been a visiting professor for several American universities and, for the last decade has been an Associate Professor at the University of Santo Domingo, in the Dominican Republic. It’s precisely in this country that a large part of La tumba de Colón (Columbus’ Tomb, Ediciones B 2006) takes place. The narrative strength of the novel and its intricate plot represent a brilliant debut for the author, as it has been a successful seller and has been translated into a number of languages. His second novel El papa mago (The Wizard Pope, Martínez Roca 2008) a thriller based on the mysteries of the end of the first millennium, the mythic year 1000, has been translated into English, Italian and Russian, among other languages.

His novel El país de los espíritus (The Country of Spirits, Martínez Roca 2011), a literary voyage to the magic island, is an astonishing return by the author where his first novel took place, although this time around he presents the realities of an amazing country, Haiti, as unknown as it is fascinating.