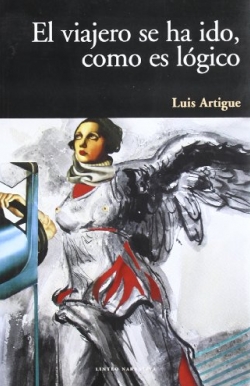 Year: 2003
Editorial: Línteo
Language: Español, Catalán
Published at: España
Synopsis: Manuel Muro, a reckless and heterodox painter, arrives in Paris with an empty case and, once there, life fulfils him at the same time that he fills his case. Thanks to his immense capacity to fascinate, he gets very close to the most interesting people in the town. In this way he made friends with Unamuno who gives him the manuscript of his “Diario de París”, the which he puts in his case; Juan Gris paints a portrait of two prostitutes. He gives it to Manuel as a present and he puts it in his case. Natalie Barney gives him a fountain pen, and Djuna Barnes his cape and his hat; Hemingway the manuscript of “Paris was a Feast”, Picasso, Gertrude Stein…

But, in a certain occasion, when Manuel was making love to Peggy Guggenheim in a hotel, he was caught unawares by Peggy´s husband. Nervousness is contrary to speed … Manuel Flew away through the window leaving his case behind in the room.

This novel begins forty years after that flight in a room at Sotheby´s where the objects from Manuel´s case are being auctioned. An old man, still attractive and appealing, comes into the room. He sits down besides a woman and she begins telling him where the objects at the auction come from: by doing that, what she is really doing is telling him a story about the heterodox masculinity, about the geniuses that are out of the common standard, and about friendship as an antidote against vulgarity. She is telling him the novel.