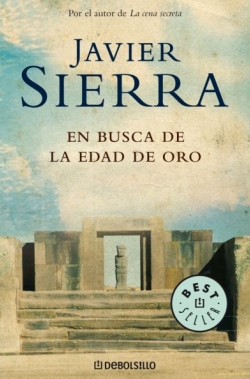 Year: 2000
Editorial: Grijalbo
Language: Español, Catalán
Synopsis: If we go beyond strict orthodoxy, much of what we appreciate from the life of our ancestors shows that it held in its power surprising scientific knowledge. So much skill and wisdom make the hypothesis of a remote Golden Age of which we have lost all historic memory believable. To prove the existence of this lost age for humanity, now 10 thousand years-old, and to put forth convincing proof of what it was like, Javier Sierra has traveled to more than 10 countries, amazed by certain technological clues hidden in languages more than 40 centuries old. From these discoveries, and from the anecdotes that have inspired his travels, we are presented with “In Search of the Golden Age”, a book which is a diary and field-pad all in one, where Javier Sierra gathers sufficient facts to cast a shadow of doubt over what we thought we knew about the history of our past.

Of our contemporary authors, Javier Sierra is one of our most international. After the overwhelming success of his novel “The Secret Supper”, published in 40 countries and on the bestseller lists of the likes of the New York Times, he published “The Forbidden Route”, the first essay on historical enigmas, which has broken the twenty-week barrier in the Spanish best seller lists. “The Lady in Blue” followed in tow, already published in the USA and in another 20 countries. The secret? His ability to weave transcendental stories, those by which we are forced to think about the mysteries of the soul. Sierra is also the author of novels such as “The Templar Gates” or “Napoleon’s Egyptian Secret”. Unrelenting researcher of the occult, he founded the magazine “Year Zero”, ran “Beyond Science”, and has been in charge of television programs and collaborates in both national and international media.