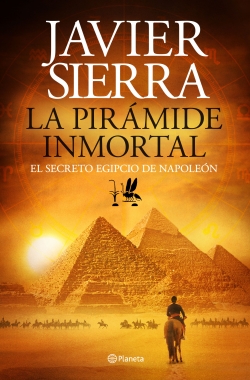 Year: 2014
Editorial: Planeta
Literary Category: contemporary fiction
Language: Español, Catalán
ISBN: 9788408131441
Format: Hardcover
Pages: 350
Synopsis: Napoleon Bonaparte became the most powerful man of his time and was a step away from dominating all of Europe. A little earlier on he led a hardly unheard military and scientific campaign in Egypt that totally changed his mind. Why did he spend an entire night, all by himself, inside the Great Pyramid?

What happened there? How did that episode alter his destiny?

The Immortal Pyramid narrates three days in the life of the young Napoleon. We are in 1799. It has been a year since the French troops have disembarked on the Egyptian coasts.  Among them, a hundred or so scientists of the most diverse fields of knowledge. Napoleon has three objectives in that campaign at the other end of the Mediterranean: expel the Turks so as to gain a strategic position in the region, cut off the important British commercial route with Asia and—no less important for him—learn as much as possible regarding the portentous civilization of the pharaohs. What the general never imagines is what he will really find in Egypt.

THE GREAT PYRAMID: AN IMMORTALITY MACHINE?

Javier Sierra is one of the few contemporary Spanish writers with greatest international projection. In 2006, his novel, The Secret Supper, became the number six-most sold book in the United States, according The New York Times prestigious ranking. He was the first Spaniard—and till now the only one—having such sign of recognition and, as a result, his books have been published in more than forty countries. Novelist, traveler, researcher… Sierra, is, essentially, a seeker of the truth that hides in the most recondite places. His great merit is his innate capacity to interpret history’s small details from an astonishing perspective. The Il Messgero di Roma said this about him: “He’s got a rare talent to combine science and occultism, the theological enigmas and the mundane conspiracies, the deciphering of ancient documents and the interpretation of works of art. He manages to keep the reader in tenterhooks till the very last page.” And these virtues are once more in evidence in The Immortal Pyramid, perhaps his most intimate book. An original novel that, besides revealing an almost unknown historical episode in Napoleon Bonaparte’s life, allows us to submerge into Javier Sierra’s profound mind.