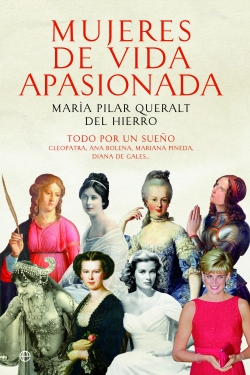 Year: 2010
Editorial: La Esfera de los libros
Language: Español, Catalán
Published at: Presença (Portugal)
Synopsis: Throughout history it can be easily proven that passion, equally that from love, ideology or simply vital, has had the most tragic of consequences for the female gender. There are many hundreds of cases where the consecration of an artistic life, that of love, or one lived for a political or religious cause have had a tragic ending. The eternal struggle between Eros and Tanantos, passion and death, it’s a constant theme in the biography of many women over the course of time and throughout the world.

Filling the pages of this title, appear the stories of many of these women, who, in their time, were capable of fighting for their ideas or live for a love even if it cost them their life. Women like that of; Joan of Arch, Inés de Castro, Ana Bolea, María Estuardo, Mariana Pineda, Olimpia de Gouges, Mata Hari or Diane Fossey who died victims of the intolerance that surrounded them or for committing the crime of loving passionately. Women the likes of; Beatrice Cenci, Isabella de Morra or the many other victims of violence against women, in many cases they were sentenced to live with their executioner. Women like Astrid de Bélgica, Grace Kelly or Diana of Gales, who became legendary icons. All have their place in history, and its just that they should be remembered.