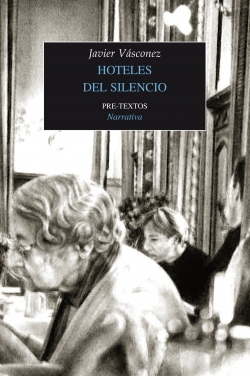 Year: 2016
Editorial: Pre-Textos
Literary Category: police, black and suspense
Language: Español, Catalán
ISBN: 9788416453917
Pages: 336
Synopsis: From the novel’s suggestive title, Javier Vásconez drags us to edge of horror. Because is there anything more hair-raising than the wailing of a child breaking through in the middle of the night from a hotel? But perhaps the greatest merit of “Hotels of Silence” is the weaving of several stories of maddening humanity in one single novel. Its setting is a city rocked by a terrifying succession of kidnappings and murders, of atrocious crimes, whose victims are children, the most defenseless and vulnerable of its inhabitants.

In Vásconez’ work, the characters that people it are in search of love and themselves. Characters that carry in their consciences unfished stories of an oppressive past, determined in rebuilding their lives marked a chain of failures.

Diving into the territory of the hardboiled novel, the common thread of "Hotels of Silence” is an exploration of tension and suspense that unleashes a story of love and jealousy between the young Loreta and the owner of the stationary shop “Paris”, Jorge Villamar. Here is where without concessions that the “dark and tedious side of men” is crystalized, with a vigor that drags us with its great hypnotic power, leaving in the reader an experience where solitude, madness, evasion and horror, raise as rare overseeing specters both of the city and its inhabitants. Therein lies the strange and plausible universality of “Hotels of Silence”.