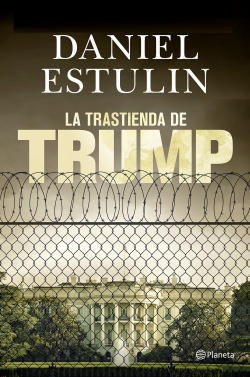 Year: 2017
Editorial: Planeta
Literary Category: essays
Language: Español, Catalán
Pages: 352
Synopsis: On the 9th of October, 2016, occurred something that everyone thought impossible: Donald Trump, a multimillionaire tycoon with a totally xenophobe discourse, savage and populist, won the presidency to the White House, endangering such values as democracy and world peace.

Along the lines of his successful books “The Bilderberg Club” and “Out of Control”, Daniel Estulin informs us that nothing is casual and that behind that scary event there lie many interests. How could we have reached this point? Was it a truly democratic event? And, more so, what interests hide behind this election?

From his privileged condition as an ex-Russian spy, Daniel Estulin delves in the long process that brought Donald Trump to the presidency, and in “Trump’s Backroom”, he offers us a behind-the-scenes chronicle of the actors, governments, companies and institutions involved in his election and of the returns that now, once their objective has been obtained, they expect to get in return. Thus we penetrate a world that is about to explode and change forever.