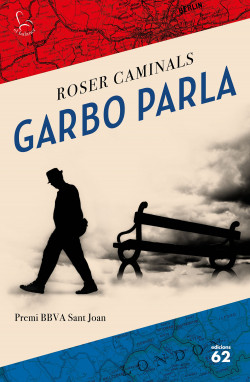 The writer and literature teacher Roser Caminals is the winner of the 41st BBVA Sant Joan Prize for Catalan literature with Garbo Speaks.

The award-winning novel has as its sole protagonist the Catalan secret agent Joan Pujol i Garcia, alias, Garbo, who played a decisive role in World War II, deceiving the Nazis about the place and scope of the Normandy landings.

Joan Pujol Garcia (1912-1988), Garbo or Arabel for the Germans, is considered by some to be the best spy in history. Apart from collaborating with the English secret services, this hustler with an ambiguous ideology and great imagination, who had deserted from the Ebro front, became the right-hand man of the Abwehr, the German secret service in Spain. His great success was convincing the Germans that he had a network of spies—really false—thanks to which he managed to send them erroneous information, favoring the Anglo-American landing in Normandy.

For Caminals, Joan Pujol was "like an endearing grandfather, a Catalan bourgeois with a double life that he himself hardly knew why he had it". It was precisely this mixture of an apparently ordinary character with a life full of mysteries that motivated the writing of a novel that flees from the classic spy story label.