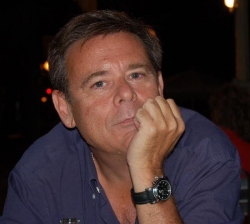 Antonio Gómez Rufo (Spain, 1954) studied law at the University Complutense of Madrid, and while still a student started collaborating in various media as a journalist. In 1983 he was asked to head the Cultural Hall of Madrid’s Town Council and the Cultural Centre of the Capital City of Madrid. In that same year he published the book of short stories Opera 5 and El último verano de la familia Manela (The Last Summer of the Manela Family), and a novel El último goliardo (The Last Goliard), which was shortlisted for the Vertical Smile Award (Tusquets Editorial). From 1987 to 1992, he published various novels: Así es Madrid (Thus is Madrid), Nathalie, El Club de los osos traviesos (The Club of the Mischievous Bears), Aguas tranquilas, aguas profundas (Calm Waters, Deep Waters) and El carnaval perpetuo (The Perpetual Carnival); the essays Madrid, bajos fondos (Madrid, Underworld), Juegos eróticos de salón (Erotic Salon Games) and the children’s book El Cazador de nubes (The Cloud Hunter). From 1991 to 1994 he worked on his novel La Leyenda del falso traidor (The Legend of the False Traitor) and collaborated in various news media. In 2005 he won the Fernando Lara novel award, with El secreto del rey cautivo (The Secret of the Captive King). It is also worth noting that he belongs to the Editorial Committee of the magazine GALERNA (Montclair State University, New Jersey, USA) and is a Knight of the Literary Order Francisco de Quevedo. Gómez Rufo is Vice-president of the Collegiate Association of Spanish Writers (ACE). He was president of the Madrid Literary Circle and presently, he is a member of the Spanish section of the World Alliance Against Poverty (founder and coordinator of the platform of Writers for Peace) and member of the Spanish Association of Noir Writers.