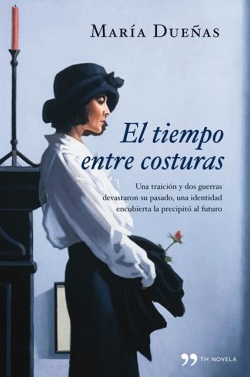 Year: 2009
Editorial: Temas de Hoy
Language: Español, Catalán
Published at: Hermes (Bulgaria), Planeta do Brasil (Brazil), Polirom (Romania), Insel/Suhrkamp (Germany), NHK Publishing (Japan), Planeta (Spain), Porto Editora (Portugal), Toledo (Estonia), Muza (Poland), Kalimate (Morocco), UAB (Lithuania), Jota (Czech Republic), Gyldendal DK (Denmark), Patakis (Greece), Zvaigzne-ABC (Latvia), Fraktura (Croatia), Simon & Schuster (Spanish language, USA), WSOY (Finland), Albert Bonniers (Sweden), Pegasus (Turkey), Gabo Kiado (Hungary), Modan (Israel), Pan MacMillan (Australia), The Viking Press (UK), Simon & Schuster (English language, USA), Samtoh (Korea; Rights reverted), AST (Russia; Rights reverted), Thinkingdom Media Group (Chinese simple, China), Thinkingdom Media Group (Chinese complex, Taiwan), Columna Edicions (Catalan language, Spain), Gyldendal Norsk (Norway), Blanvalet (German), Wereldbibliotheek (The Netherlands), Mondadori (Italy), Robert Laffont (France), Laguna (Serbia)
Synopsis: The young seamstress Sira Quiroga leaves Madrid months before the up-rising, dragged by her unbridled love for a man whom she hardly knows. Together they settle in Tangiers, a mundane city, exotic and vibrant where all the unthinkable can become real, even betrayal and desertion. Alone and hounded by debts, Sira moves to Tetuan, capital of the Spanish Protectorate in Morocco. With unspeakable schemes and the help of friends of ill repute, she forges a new identity and manages to get a select atelier underway in which she attends to clients of a remote origin and other unsuspected ones. From then on, with the war recently concluded and the European one about to begin, the heroines destiny becomes linked to a handful of historical characters of which we should underline Juan Luis Beigbeder —the enigmatic and scarcely known Minister of Foreign Affairs of the initial Francoism—, her lover, the eccentric Rosalinda Fox, and the naval attaché Alan Hillgarth, Chief of British Intelligence in Spain during the Second World War. Between them all she is pushed towards a risky compromise in which the cloths, the stitches and the standards of her occupation become the visible façade of something much murkier and dangerous. Written in splendid prose, The Couturier moves at an unstoppable pace through maps, memory and nostalgia, taking us all the way to the legendary colonial enclaves of North Africa, the pro-German Madrid, and the immediate post-war years as well as to a cosmopolitan Lisbon flushed with spies, opportunists and rudderless refugees. The Couturiers is a thrilling adventure in which the ateliers of haute couture, the glamour of fancy hotels, political conspiracies and the obscure missions of the secret services, blend with the loyalty towards those whom we cherish and the unhinged power of love.

"How can a novel be both cruel and tender, dark and luminous all at the same time, and keep the reader glued to its pages with a complex, captivating narrative? María Dueñas's novel manages to make this possible with a tale that is destined to become a literary classic." Javier Sierra, bestselling author of The Secret Supper and The Lady in Blue (From Simon & Schuster Web).