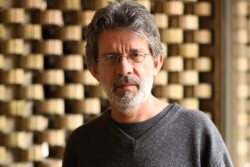 Tomás González (Colombia, 1950) studied Philosophy before becoming a barman in a Bogotá nightclub, whose owner published Primero estaba el mar (In the Beginning Was the Sea), his first novel, in 1983. González has lived in Miami and New York, where he wrote much of his work while making a living as a translator. After twenty years in the US, he returned to Colombia. His works include the novels Para antes del olvido (For Before Forgetfulness, 1987), La historia de Horacio (The Story of Horace, 2000), Los caballitos del diablo (The Devil’s Little Horses, 2003), Abraham entre bandidos (Abraham Amid The Bandits, 2010), La luz difícil (The Difficult Light, 2011), Temporal (2013) and Niebla al mediodía (2015); the collection of poems Manglares (1997) and the short story collections El rey del Honka-Monka (1993), El lejano amor de los extraños (2013) and El Expreso del Sol (2016). His works have been translated into several languages.

“Tomás González, has the potential of becoming a classic of Latin American literature. On reading him I had the feeling he was a writer with lots pureness.” Elfriede Jelinek, writer, Nobel Prize winner