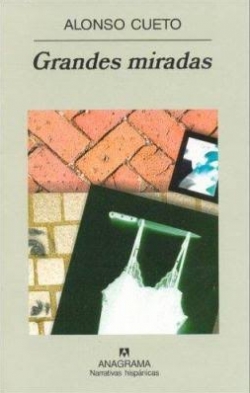 Alonso Cueto’s Grandes miradas (Big Gazes), is set in Peru during the final months of President Fujimori’s dictatorship, and begins telling the true story of Guido Pazos, a judge assassinated in the year 2000 for his refusal to succumb to corruption. (Cueto has only changed the name of the judge). Another character drawn from real life is Vladimiro Montesinos, former spy chief and Fujimori’s closest advisor, said to have ordered the execution. In the novel, the murdered judge’s girlfriend, Gabriela, vows to avenge his death by killing Montesinos. In her search of Montesinos and his fellows, she will discover her dark side, living and experiencing in her own flesh and blood the effects of violence upon people. Her life becomes a personal fight between what she sees and lives and her previous ethic and moral concerns.

Grandes miradas is the breathtaking story of a conscience carried to the edges of the exploration of evil, and the chronicle of the facts that can lead someone to be obsessed with revenge. But, in turn, it is also a chant to solidarity, compassion and justice.

The novel ends with the government’s downfall, but not before many intrigues and unexpected twists have transpired. The novel was published by Peisa in Peru (2003). Anagrama (Spain) published it in January 2005.