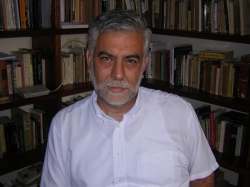 Alonso Cueto (Lima, 1954) is the author of several novels, short stories and essays. Cueto has won several distinctions for his literary work, including the prestigious Herralde Award (Spain 2005) for his novel La Hora Azul (The Blue Hour), the 2007 Casa de Ámericas-Planeta second-place prize for his novel Susurro de la Mujer Ballena (Sigh of the Whale Woman) and the Anna Seghers Prize for his body of work (Germany, 2000). In 2006, the Chinese based National Publishing House, considered La Hora Azul, the best novel published in spanish in the 2005-2006 period. He also received a John Simon Guggenheim Foundation grant in 2002.

Cueto, a graduate from the University of Texas at Austin, currently lives in Lima, Peru. He is a full professor of the Literature and Linguistics Department of the Universidad Católica. He is also a member of the peruvian chapter of the Academia de la Lengua of Spain. In 2017, he was awarded the title of meritorious personality of culture by the Peruvian government.