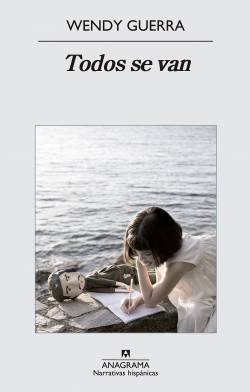 Year: 2014
Editorial: Anagrama
Language: Español, Catalán
ISBN: 978-84-339-9782-1
Pages: 264
Synopsis: A story in the form of a personal diary that covers age 8 to 20 of Nieve Guerra. Todos se van narrates the childhood and the adolescence of the protagonist, who, since her birth, drifts through her own life thanks to the Cuban State that decides her destiny, always subject to an uncertain end marked by a social-political aspect.  Nieve resists the hazardous life of her parents and the terror of growing up in a society controlling to the point of suffocation that continues taking away all of her affective possessions. Nieve is a survivor, a sagacious character from a generation of Cubans born after the year 1970 that need to exist in first person from a gregarious and collective experience that culminates in the islander diaspora. Todos se van is a fiction novel that recreates the diary of its author’s childhood, who writes in her notebook while she waits on her island for the return of her loves. It was brought to the big screen by Sergio Cabrera in 2014. The diary will continue… The first edition of Todos se van won the first Novel Bruguera Prize (publishing house then managed by Ana María Moix) on March 2nd, 2006, awarded, in the role of the only judge, by the writer Eduardo Mendoza: “A troubling, personal and social experience, narrated without judgement of any kind, an instructive and enriching journey.”