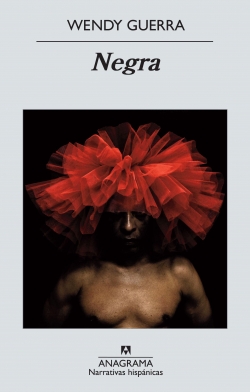 Year: 2013
Editorial: Anagrama
Language: Español, Catalán
ISBN: 978-84-339-9768-5
Format: Softcover
Pages: 328
Synopsis: Nirvana del Risco is the first black Cuban heroine that shows herself naked, open and brutal faced with that which, because of prejudice, many hide: bisexuality, racism, politics, fear and close intimacy with the enemy. A daughter of the 60s generation and a rebellious Havanan protagonist in the 2000s, she takes the path between the prohibited and the sacred, revealing occult recipes established in an Afro-Cuban culture (Regla de Ocha). Rituals that go from the dynastic Cuban witchcraft, that which few openly accept and which are used in daily rituals and incantations, to the complex balancing act between race, sex, politics, and religion.

Nirvana leaves the oracle convinced that the Afro-Cuban cult is retaining the legend of her life, but decides to free herself and to change the rules, to disobey the words that the Orishas dictate, retiring from her life all the antidotes to the terrible plans that have accompanied her since birth.

Endemic seasonings, native and sensual accents, bittersweet and tropical flavors reveal a hidden part of the mixed Cuban nationality. This creole and enlightened model is presented with an epic, unique, and dark journey that she takes fearlessly, a passionate route between Cuba and France, where she plans to settle, knocking down clichés and breaking stigmas about what it means in the world today to be a beautiful Cuban woman and black like the night. The tragic fate of the heroine narrates a profound and little-explored part of female Latin-American literature.  With a magical and contemporary language, the author invites us on a singular trip bathed in sublime black tears.

The word “Negra” (black woman) is for some a taboo term; for the protagonist of this splendid novel it contains all the music, the flavor, and the feeling of her body, her soul, and her nation.