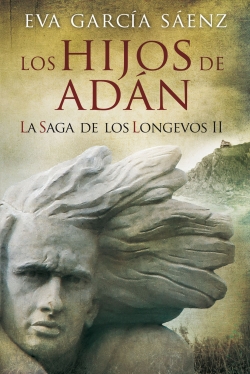 Year: 2014
Editorial: CreateSpace Independent Publishing Platform
Language: Español, Catalán
ISBN: 1500480770
Pages: 380
Synopsis: The Sons of Adam is the highly anticipated sequel of the International Best Seller The Immortal Collection, the first installment of A Saga of the Ancient Family, which has captured the hearts of millions of teen and adult readers in the US, UK and Europe.

The story begins with the unexpected return of Gunnarr, the son that Iago thought had died in the battle of Kinsale in Ireland in 1602. Gunnarr will change the peaceful life that Iago del Castillo and Adriana Alameda had built for themselves in Santander, Spain.

Prehistory, Europe: Lür travels across a devastated land looking for the clan of The Sons of Adam and their legendary matriarch, Adana, who, it is said, never grows old.

800 AC, Denmark: Gunnarr tells Adriana about his youth and how he became a berserker, a member of a dangerous and legendary group of Viking warriors.

1620 AC, New England: Urko boards the Mayflower, where he meets Manon Adams, a strong woman who will leave her mark despite the passing of time.

The Ancient Family travels through time to discover that they have been persecuted since before their birth. This riveting story will leave you begging for the next chapter of The Immortals Series.

The past always comes back to haunt a longevo.