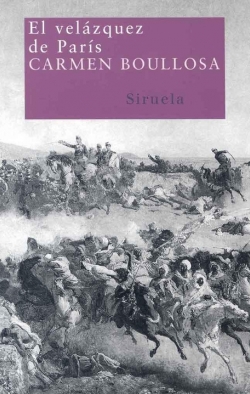 Year: 2007
Editorial: Siruela
Language: Español, Catalán
Synopsis: At the beginning of 2001, in a small Parisian restaurant, an older man fondles the two young ladies that accompany him. What most surprises the eavesdropper at the next table is to hear this man brag about owning something as extraordinary as the Velázquez which was thought lost during the fire at the Real Alcázar of Madrid on Christmas Eve of 1734. It’s the “Expulsion of the Moors”, whose creation established the young painter as the greatest of all times.

This novel is the story of that great painting, of its long voyage, and depicts a dizzying road that will take us to the plains of intimacy to those of history, from hallucination to realistic introspection, from fantasy to the intense relation that art maintains with life.