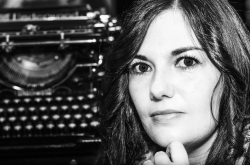 This Galician writer of YA titles has achieved unanimous praise from critics and audiences alike, ever since the publication of "Escarlatina, the Corpse Cook". This work has received a number of awards (among others, the National Literature Prize in 2015) and has garnered enormous sales success, first in Galicia and then in the rest of Spain, as well as various translations in other countries. The successful prequel "Esmeraldina, the Little Ghost" and the large format book "The Secret Files of Escarlatina", which make up a unique trilogy, have contributed to this success.

Moreover, she is the only Galician author who has two Lazarillo prizes, the oldest award in Spanish literature. The awarded works were "Jules Verne and the Secret life of the Women Plant" and "The Ballad of the Unicorns". The first mixes reality and fiction following the visit that Jules Verne made to Vigo at the end of the nineteenth century, and the second is a dazzling fantasy work with a marked steampunk aesthetic. Born in Vigo in 1979, she was a voracious reader from a very early age, writing her first book (A Star in the Wind) at sixteen. After finishing law school and practicing law for several years, she abandoned this profession to dedicate herself exclusively to writing, focusing primarily on a children and young adult audience.

In her already long career as an author, there are titles such as "Jupiter's Heart", (which deals with the subject of school bullying and the dangers of social networks), "The Adventures of Extravaganza Pérez", "Misses Bubble", or "An Alleged Mist" (a very hard book of short stories based on some of the most chilling incidents of World War II).