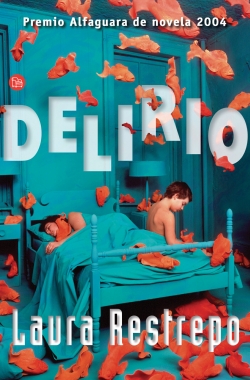 Internationally acclaimed for the virtuosity and power of her fiction, Laura Restrepo has created in Delirium a passionate, lyrical, devastating tale of eros and insanity.

Aguilar, an unemployed literature professor who has resorted to selling dog food for a living, returns home from a short trip to discover that his wife, Agustina, has gone mad. He doesn’t know what has happened during his absence, and in his search for answers, he gradually unearths profound and shadowy secrets about her past.

On one level, Delirium reads like a detective story, as the reader pieces together information to discover the roots of Agustina’s madness. But it is also a remarkably nuanced novel whose currents run much deeper, delving into the minds of four characters: Aguilar, a husband passionately in love with his wife and determined to rescue her from insanity: Agustina, a beautiful woman from an upper-class Colombian family who is caught in the throes of madness; Midas, a drug-trafficker and money-launderer, who is Agustina’s former lover; and Nicolás, Agustina’s grandfather. Through the mixing of these distinct voices, Laura Restrepo creates a searing portrait of a society battered by war and corruption as well as an intimate look at the daily lives of people struggling to stay sane in an unstable country.

Delirium already has been awarded the 2004 Premio Alfaguara, the 2006 Grinzane Cavour Prize in Italy, and was shortlisted for the prestigious Prix du Meilleur Livre Etranger in France for best translated fiction. It is an ambitious and deeply affecting masterwork by one of Latin America's most important contemporary voices.

“Delirium is an extraordinary love story about a man heartbreakingly in love with his wife; who searches and searches for her until he can finally imagine that he has actually found her.  Yes, there’s violence, narcotraffic, madness, perhaps even love itself as a form of total madness. The important thing is that we’re talking about a truly great novel, of a kind that you seldom encounter anymore...When the quality of writing reaches the level Laura Restrepo has achieved here, you have to simply take your hat off to her. Restrepo has a total mastery over what she writes, an astonishing but absolute mastery. Countless readers are about to experience the pleasures of one of the finest novels written in recent memory.” --Jose Saramago

“This beautiful and disturbing book haunted me during the days I read it and long after I put it down.  Love, unknowability, loss and even various forms of gain elide from one to another of its passionate, unnerving voices.” –Vikram Seth

“Laura Restrepo breathes life into a singular amalgam of journalistic investigation and literary creation. Her fascination with popular culture and the play of her impeccable humor…save her novels from any temptation toward pathos or melodrama, and infuse them with unmistakable reading pleasures.” --Gabriel García Márquez

“Colombian novelist Laura Restrepo's Delirium is a book-and-a-half: stunning, dense, complex, mind-blowing. It tackles the question of how we live in an insane world, a world where everything on Earth is a metaphor for everything else; where crime, vice, virtue, sex, lies and truth exist in a series of baffling symbiotic relationships; where utterly batty human beings appear as perfectly sane, where the sane among us end up appearing perfectly bats… Think of William Styron's Lie Down in Darkness or Ken Kesey's Sometimes a Great Notion."  --Carolyn See, Washington Post Book World

“Restrepo writes with a sinister lyricism and a dry, leavening wit, detailing the ways in which money, power, and corruption have scourged the fragile Agustina and her city.” –New Yorker

“Restrepo — very ably translated here by Natasha Wimmer — manages her tricky, time-hopping, polyphonic structure with uncommon grace. Everything in "Delirium" flows, like tributaries into a river. And where that mighty stream is meant to take us, I think, is back to that large body of passionate, history-obsessed literature that is (or was) Latin American fiction.”  --Terrence Rafferty, New York Times Book Review

“Saying that Laura Restrepo's writing is beautiful is kind of like saying that the Eiffel Tower is in Europe. It's true, but more than misses the mark. Every word in Delirium, the English translation of this Colombian author's prize-winning novel, is perfectly chosen, painfully honest and brutally effective. Restrepo chooses her words like a poet, with infinite care.”   --Philadelphia Inquirer

“Colombian novelist Laura Restrepo, celebrated author of Leopard in the Sun and The Angel of Galilea, adds the masterful Delirium to her impressive oeuvre.” –Milwaukee Journal Sentinel

“Although the four voices and Restrepo's time-hopping narrative may be confusing at first, the author's hypnotic prose, the backdrop of the chaos of Colombia at the time and the gradually unfolding tale behind Agustina's madness draws the reader in. And we become as eager as Aguilar to unearth the cause of Agustina's anguish and bring her back from — as her husband puts it — ‘the barred door of the delirium that won't let her out or me in’.”  --Associated Press

“It has all the tension of a great detective story, and Wimmer’s translation captures every tormented bit of Aguilar’s desperation.” –Publishers Weekly